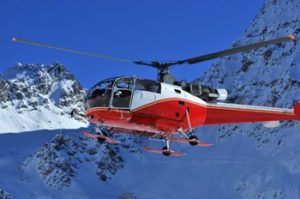 In an airplane, the only moving part, so to speak, is the engine. Pretty much everything else, other than the landing gear when needed, is fixed. In a helicopter, if the part is attached to the helicopter, chances are it’s moving, and moving at a high rate of speed.

In a single engine helicopter, the engine typically turns a shaft that goes into a large transmission box. That transmission will then turn two other shafts that run about 90 degrees off from one another. One goes up and turns the main rotor blades and the other goes back into another gear box that re-directs the motion about 90 degrees again to turn the tail rotor blades.

The movement of the main rotor blades is sort of similar to the movement of a carnival carousel. All of the blades can be moved up or down at once, and simultaneously each individual blade can change its pitch separately from the others. This allows the helicopter to hover, fly forward, fly backwards or fly sideways. This video provides a pretty good description of basic helicopter operations.

Although not always, helicopter crash cases often fall into three broad categories: (1) sightseeing tours; (2) medical transport flights; and (3) offshore helicopter crashes. Each of these case types has a unique set of issues.

The attorneys at Angelley, P.C. have that experience and level of knowledge. Please contact our primary helicopter crash attorney, William Angelley, to find out if we can help you.